I’ll tell you what this “super secret” tip is straight away: create first, consume later. 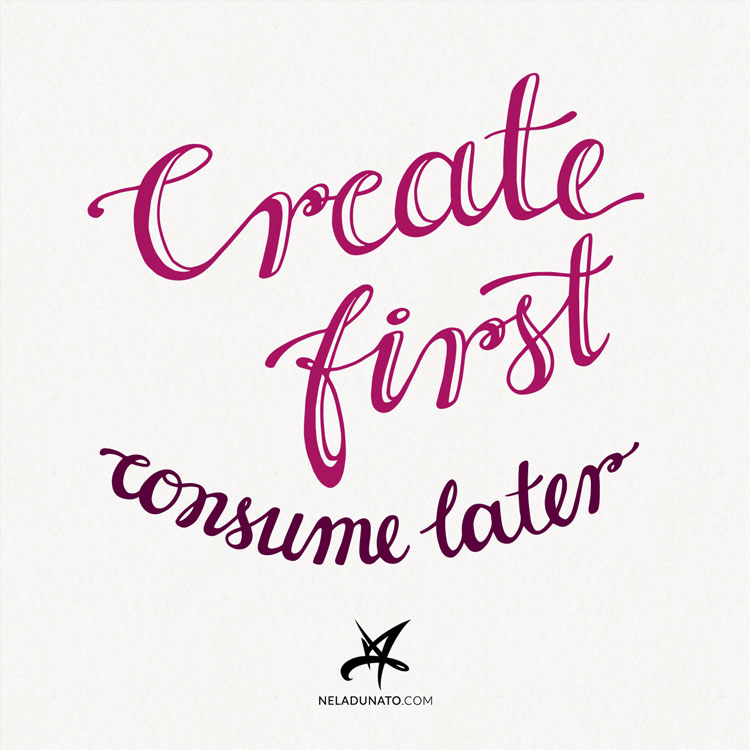 That’s it. Simple. Not easy, though. If it were easy, more people would be doing it.

I’m not a big fan of rules – in fact, whenever I encounter a rule, my first instinct is to do exactly the opposite. But I’ve learned that sometimes making rules for myself can be a very effective way of making decisions that I’ll be happier with later.

For this reason, a straightforward rule like create first, consume later is something I strive to follow, even if I don’t succeed every time.

Creative rebels like us don’t like to follow any old rules just because someone said so. I know I have a tough job of convincing you why this tip is so helpful and might radically transform your creative output. In the rest of this post, I’ll try to make my best case for it, and offer some ways you can put it into practice.

1. Willpower is a finite resource

The psychologist Roy Baumeister proposed the idea of Ego depletion which suggests that we have a limited amount of mental resources that get used up over the day. This means that we have the highest amount of “willpower points” in the morning, and the least amount at the end of the day.

Another related psychological concept is called Decision fatigue, which essentially says the same thing – we make our best decisions first, and as the day goes by, we get tired from all the decision making. By afternoon, our decisions become more random and less thought-through.

While we see consuming content as a passive behavior, don’t be fooled – you’re making a decision every single time you think about whether to click on a headline or not, or whether to like someone’s post on social media. These decisions are often completely irrelevant for your quality of life and your creative dreams, which means you waste your precious decision making resources on things that don’t even matter.

2. Inertia can be your best friend, or your worst foe

You may be familiar with the term inertia from the physics class, but this concept very accurately describes our behavior as well. This is how behavioral inertia works:

This means that switching between the task of consuming media in order to start a different task (like creating media) is difficult – you’ll keep postponing the switch by “just 5 more minutes” and lose the track of time.

The wonderful thing is, it also works the other way around. When you’re “in the zone” of creating something, you lose track of time and don’t think about other things you could be doing. Continuing to work on the task you’re working on at the moment feels easier than switching to something else.

You can try scheduling your activities and limiting the media consuming to an hour, but really, how often do you really stop after an hour? If you’re going to mess up your unrealistic schedule anyway, better do it so that your creative activities get priority. Use the law of inertia to your advantage.

3. Even night owls can benefit from creating first thing in the morning

People have different circadian rhythms, but this doesn't mean your most productive hours are necessarily in the late afternoon.

I'm a night owl, and given the choice, I'd always rather go to bed late than get up at 6am. I used to do a lot of creative work in the evenings and late at night, at first because I didn't have much choice – my mornings were already taken up by school and jobs. When I started freelancing, I worked in the afternoon because I procrastinated, and it took me ages to pull myself together and start. As the evening drew to a close, I had to focus intently on the task at hand to be able to finish that day's work. (The “evening” didn't magically increase my focus – the deadline did.)

Later I tried reversing my schedule, taking care of my work and art projects first, and then doing the super fun reading, socializing, relaxing and social media stuff. I managed to do even more than I did before. I didn't start waking up earlier, or changing my natural rhythm in any way. I just became more intentional about how I use the first hours of my day.

The researcher Dan Ariely claims that most people do tend to work better in the mornings (perhaps it has something to do with decision fatigue), and laments of the effects of squandering our most productive time on irrelevant things.

“One of the saddest mistakes in time management is the propensity of people to spend the two most productive hours of their day on things that don’t require high cognitive capacity (like social media). If we could salvage those precious hours, most of us would be much more successful in accomplishing what we truly want.”

Some of us need a while to fully wake up when we get out of bed, while others are ready to roll as soon as their feet touch the floor. I'm not saying you should start working half-asleep, if you fall into the first camp. I tend to start my workday about an hour, hour and a half after I wake up. In the meantime, I take time for a gentle morning ritual that includes a healthy breakfast, meditation, journaling and yoga. That way, I'm able to start my day calm, centered and inspired, instead of with my head full of crap.

If you're a night owl, give it a try, you might be surprised.

How to put this into practice

I wrote plenty on productivity before, so I recommend checking out my posts Productivity Tips from a Hopeless Procrastinator and My Top 5 Tips For Preventing Time Suck & Increasing Productivity. Here are a few things that are worth repeating:

In order to do focused creative work, it’s crucial to block all distractions that might prevent you from concentrating on a single task. I find that the easiest way to do this is to reserve mornings for focused creative work (like design or writing), and not allow any other activity to seep into this timeframe (like meetings, email, social media, reading blogs, listening to podcasts etc.)

Setting specific hours for consuming media ensures that you’re not doing it while you were supposed to be doing something else. For example, I don’t check email before noon, and I don’t check blogs and social media until 5pm. I stash all the interesting articles I run into in my Pocket app, and read it all in one batch while I’m on the bus or in the evenings on my couch. I check into Facebook groups and answer questions mostly on Tuesdays and Thursdays.

This might seem oddly specific, but making this decision beforehand helps me resist the temptations, which are abundant in our rich digital life. The question “Should I go read blogs now?” can be answered with a counter-question “Is it 5pm?” and if the answer is no, it’s a no. A simple “if-then” command applied to your life.

This is taking the previous tip a step further. I’m horrible with enforcing any rules on myself, so I use the power of apps to do the job for me.

I currently use LeechBlock add-on for Firefox, which enables me to add specific rules for differents groups of websites. It’s easy to set up, and it has a normal mode (where your normal schedules blocks are applied) and the Lockdown mode (where you can lock all websites in your schedule for a certain amount of time).

On my phone, I use an Android app called FocusON, which was the only available app that was doing exactly what I wanted (preventing me to access certain apps during certain times). While the app isn’t perfect and I have some issues with it, it does what it’s supposed to.

This approach feeds right into your brain’s reward system. For every creative thing you’ve completed and published, you may indulge in some consuming.

I don’t post every single day (and sometimes I don’t post anything in weeks) so it’s not the best approach for me, but for those of you with a more frequent posting schedule, this could work.

It’s like a mantra you can chant of as you’re going through your day. You can print the lettering piece I posted at the top and put it next to your computer to serve as a reminder. (Or you can get a high quality professional print here.)

I’m not saying you should throw out your other productivity systems out the window, but if you can make your current systems work with this rule, run it as an experiment for a month and see the results for yourself.

I hope this post gave you some ideas on how you can enhance your creative output by limiting your media consuming habits. It has done a tremendous difference for me, and I hope you’ll give it a shot.

Have you tried this already? If so, what was your experience with this approach? Feel free to share in the comments.

Are you thinking about trying this, but there are a ton of reasons running in your mind why it wouldn’t work for you? Share your concerns in the comments, and we’ll troubleshoot together :)