I loved digitally editing photographs since I was a teenager. I think my first attempts at altering photos in programs such as Paint Shop Pro and Photoshop started when I was 15 (around 2000). At first I was just fiddling with the contrast and colors, and maybe adding some filters, but then it grew into elaborate collages that required a lot of painting to get everything look like a part of the same image. I’ve collected my best works from over 10 years in my digital photo-manipulation gallery.

Today, I’ll show you how my last piece “Santa Muerte” has evolved from the original photograph, to a final composition that included collage, painting as well as vector drawing. 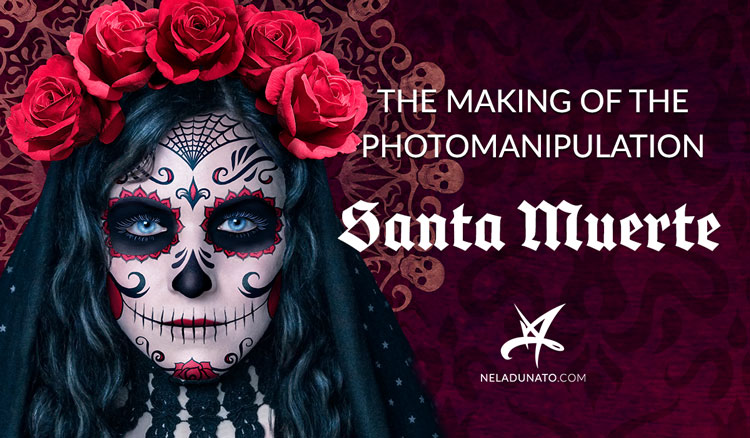 I think the reason why I don’t do more photo-manipulation is that I work exclusively with my own models. I never, ever used stock models. At first it was because I wanted people in the exact poses that I needed them to be in. I’d sketch out my compositions first, and then shoot photos to match it closely. Later, as more and more people began creating digital collages, the same models in the same clothes in the same poses started appearing again and again, so it became a matter of originality.

For this reason, beginning a new digital piece involves a bit of organization to meet with my model. Luckily, my friend Jasna was available immediately. She came to my place and I shot a bunch of photos, not only for this project, but for some other ideas that might appear later on. It was a rainy day, and since I don’t have studio lighting, we shot next to an overcast window. I knew the quality of the photos may not be that great, but my motto is to work with what I have. I always remember that I created “Electric Medusa” with a crappy 3 megapixel camera on a ridiculously slow computer that took literally 5 minutes to save my work. (And I save often.) So really, I have no excuse for not making more out of all the resources I have today.

I ended up with 17 photos I could use for this artwork, and had to narrow my choice down to one. I didn’t overthink it, and just went with my first impression. 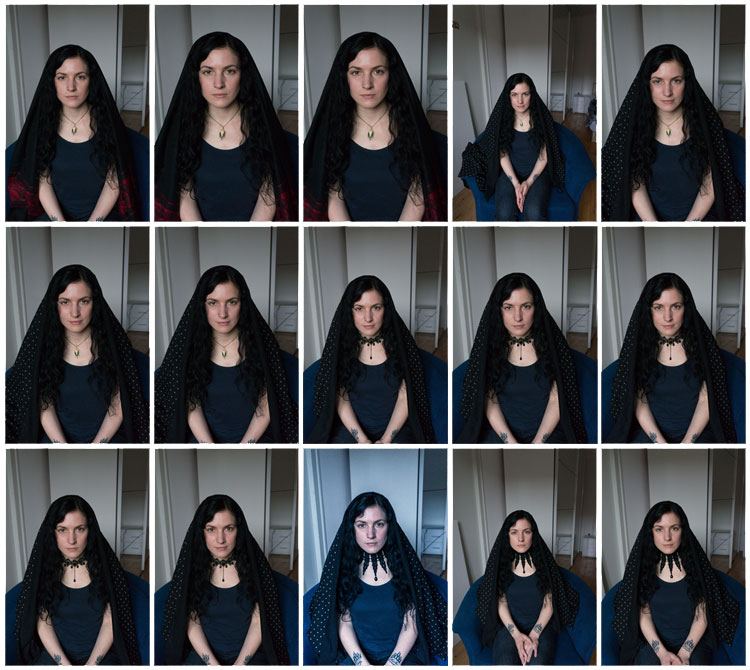 Next, I’ve opened the selected image in Adobe Photoshop*, and adjusted the color balance of the RAW photo to blueish (which is why it looks a bit pale and sickly). I’ve cropped the photo to the size I want the final art to be, and proceeded with retouching.

The great thing about having a beautiful model is that she doesn’t need a lot of retouching. I adjusted just the tiny details: 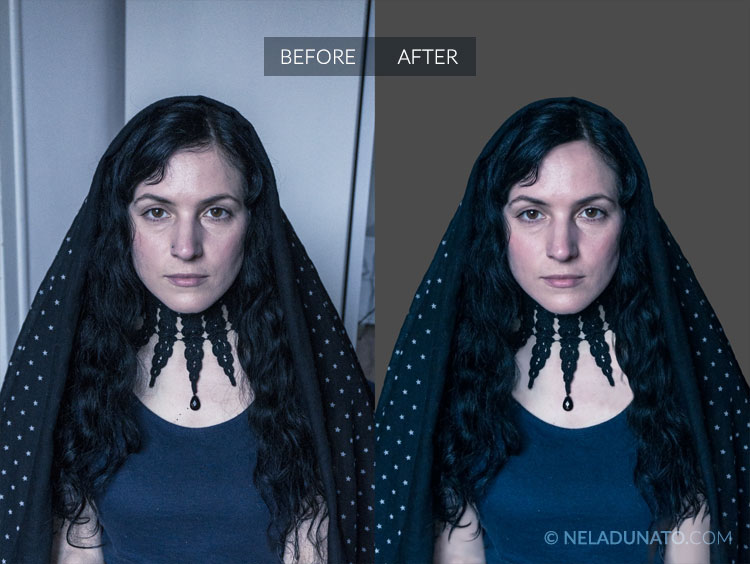 I’ve learned in painting that the background color can dramatically change the feeling of the image, so I like to introduce at least a working background before I make any modifications on the model. I chose a contrasting red as a solid fill, and placed one of my mixed media painting textures over it to get a dark crimson-blue mix. I wanted a subtle touch of the over-the-top-richness of Mexican folk art, so I added a pattern to bits of the background that didn’t have a lot of texture. I didn’t change this background much in the end. 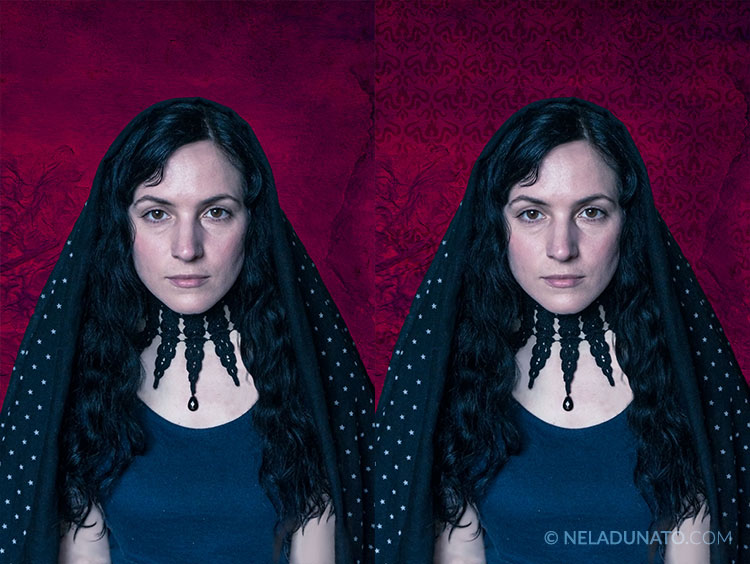 I painted a new neckline of the blouse and added bits of lacy detail. I tried drawing the ornaments myself, but it just wasn’t coming out right, so I dug into my purchased stock library and selected something that looked like it could have been done in textile. After a bit of retouching, it looked pretty decent.

I added brighter highlights on the hair, since the detail of my model’s gorgeous curly hair was lost in the darkness. I didn’t change the veil much, except to adjust the lighting a bit. 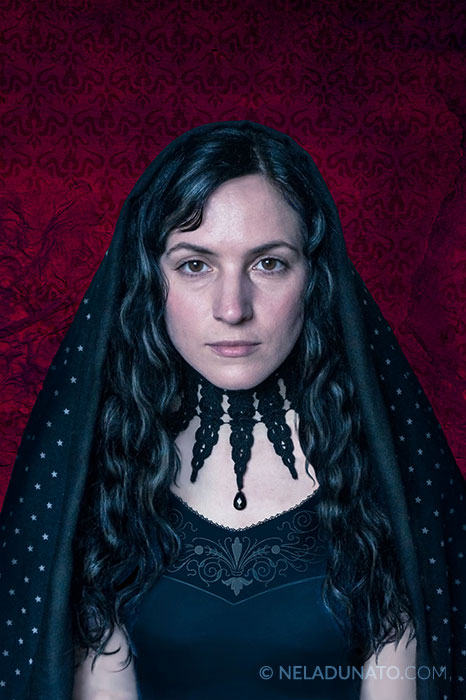 The best thing about doing digital art for a long time, is that I have hundreds (or thousands) of photos that I took over the years with the intention of using them in the future. Flowers are one of my favorite things to photograph, although I don’t use them that often in my work. Apparently, back in 2006 I took some rose photos in my parents’ garden on a white paper background (with that 3MPx camera I already mentioned). Such forethought. Those who ever tried to cut something out of a photo know how much having a uniform, contrasting background helps. I was able to cut out these babies within minutes.

I’ve arranged the roses on the top of the head in a manner that won’t look completely unrealistic (100% realism is not the aim here) and did some light retouching to remove unwanted details, and bring out the edges of the petals. Some shadows painting, and it’s done. 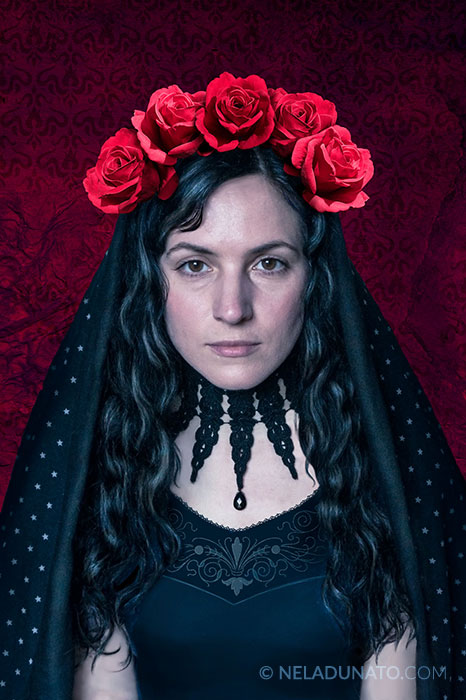 The key feature of the Muerte / Day of the Dead celebration is the face paint. I’ve decided to go with traditional motifs of roses and spiderweb, with my own flavor of swirly ornaments. It took some experimenting to get the ornament shape and placement just right.
The makeup involved: 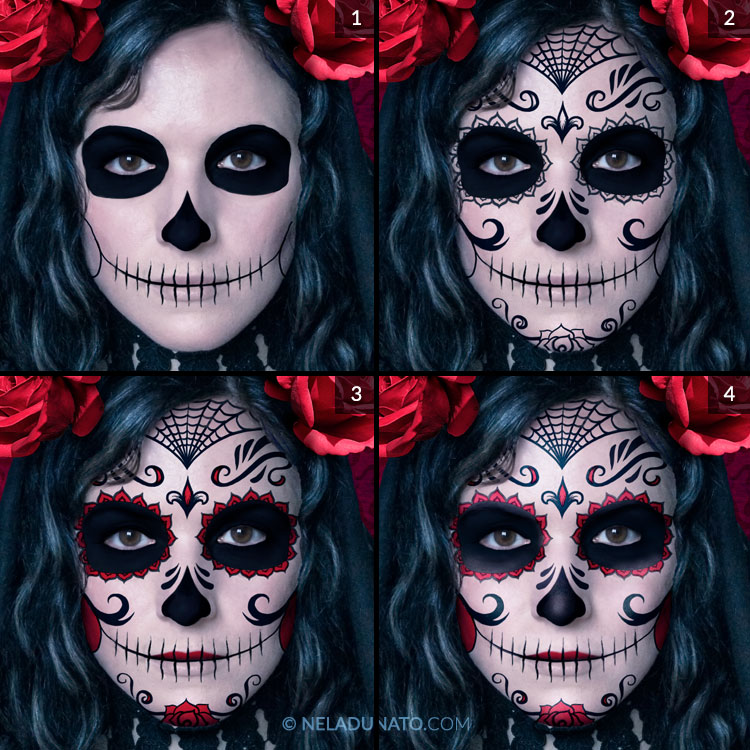 Jasna has dark eyes, and they blended in with the black eye socket makeup. The option was to turn them icy blue, or fiery red. Because the makeup is red, I’ve decided to go with blue, reminiscent of the White Walkers.

I’ve painted some white eyelashes as well, since the natural lashes were lost in the face paint. 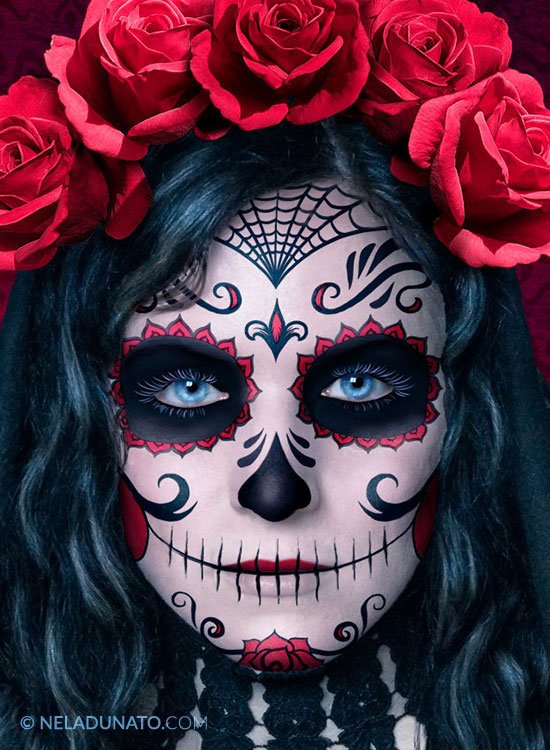 The marker of the Saint is a glowing aureole around the head. In line with the rich detail esthetic and dark theme, I wanted to draw an ornamental vector mandala in Adobe Illustrator*. I’ve re-used a skull vector I drew earlier to make things faster. 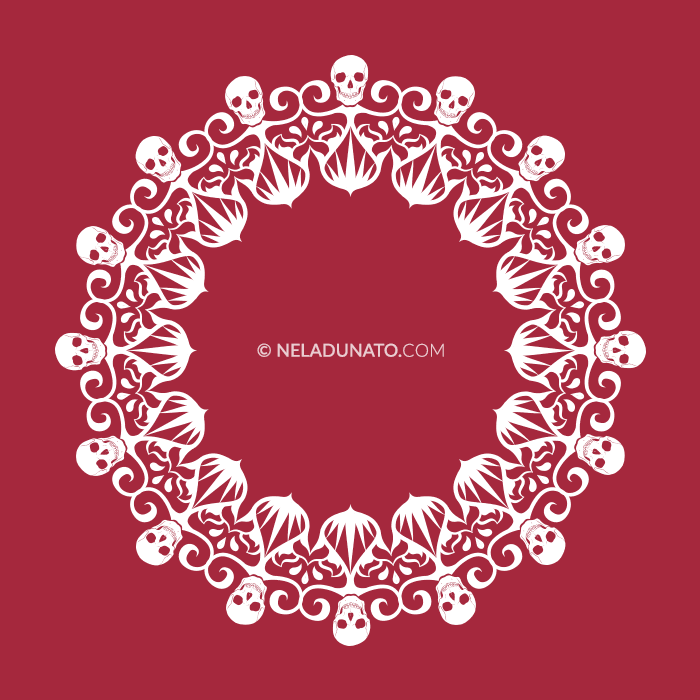 After that it took some testing of different colors and layer blending modes to get the right effect. I didn’t want the rose crown to blend with the background, so setting the exact shade of the ornament was important. In the end I’ve settled on a light orange-reddish textured aureole. 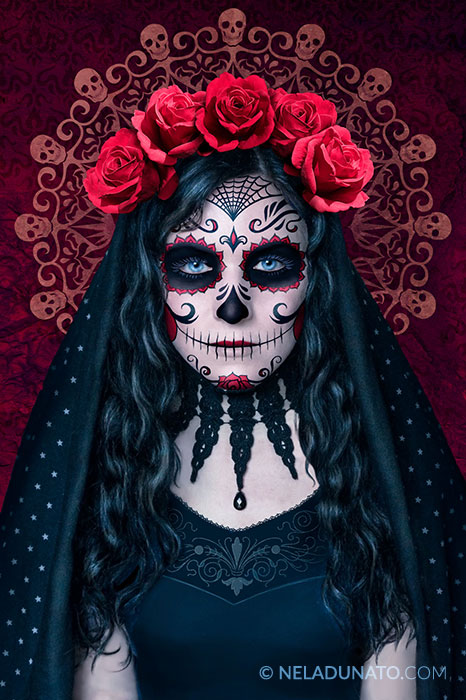 And here’s an Instagram video of the process sequence in 6 seconds:

If so, let me know in the comments, and I’ll be sure to take screenshots along the way to share them with you. 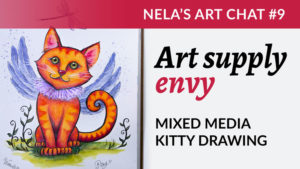 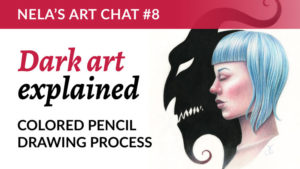 2 responses to “The making of “Santa Muerte” photomanipulation”