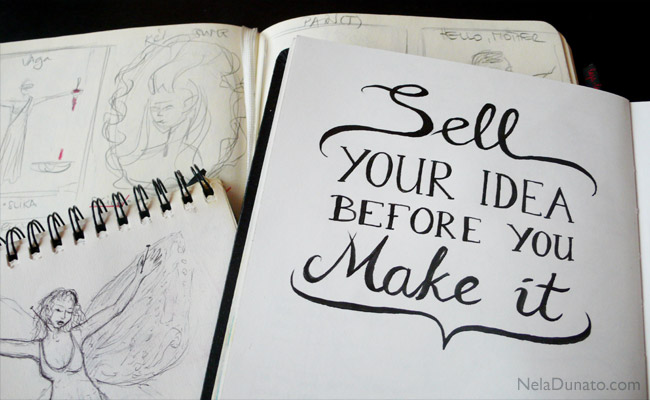 A few weeks ago my friend dragged me out of my house for some “networking” (read: drinks) with a few young developers that were in town. One was from Italy and the other one from London, and they came here for a local start-up event.

I asked them what they were pitching, and one of them pulled out a phone and showed me an app mockup made using Prototyping on Paper. Being a sketching freak, I was amazed with the app (and downloaded it right then and there), and that they made a somewhat functional interface using only rough paper sketches. They were pitching a product that they basically made up in the train on the way here.

“This is all we have, but we’re launching next week”, he said.

A few days later a photo popped up in my Facebook feed — the two of them, with a caption saying they won the first prize on the event.

With only a few sketches in hand, they managed to convince the judges that their app will be amazing, and now they’re building it.

And what do most of us do?

Sometimes the world loves it.
Sometimes we hear crickets.

We don’t know what people will say, or if will they like it and buy it until we launch it.

In the start-up world people often present early concepts of their work because they don’t want to put thousands of hours of work and boatloads of money into something that isn’t even interesting or useful to other people.

It’s not just for start-ups

A few years ago I was talking to an artist friend, and she told me she’s really busy these days because she’s painting for the exhibition that’s in less than two weeks.

“Wait, you’re having a show, and you don’t even have all your paintings done yet?” I asked.

“Yes” she answered, “that’s how it’s done in the art world. You book the show date a year or two ahead, and you paint in the meantime.”

I was young and naïve, and that concept was totally new to me. But in the art world, you often need to book a venue a year in advance. Professional artists arrange all the details of the show with the gallery first, and then paint in the months leading to the show.

A few months ago, I finally decided to try it out. There was an open call for solo exhibitions of young artists in a gallery in a different city.

At first I thought “No way, I can’t pitch a solo show with only 5 or 6 paintings ready”.
But this year was my year of failing. I decided to give it all, and try no matter how bad my chances were. I sent in my application, and crossed my fingers.

One day an e-mail came out of the blue, asking what my preferred date for the show was. That was the first time I heard I got in!

I asked for September, because there was no way I could have all the paintings ready before that. It’s mid-June now and the date is getting closer — need I say I’ll be frantically painting all summer long?

But if I didn’t have that show coming up, who knows when for how long I’d be putting it off.

My favorite productivity trick: light a fire under your butt

If you’re a procrastinator, hard deadlines will probably help you get more things done. I find that when I have a hard deadline, my productivity skyrockets and I’m able to do in a week what I seemingly couldn’t do in 3 months before that.

Self-imposed (or tentative) deadlines just don’t work that well for me. Even committing to my mastermind buddies doesn’t work. There’s not enough at stake, because it isn’t going to seriously disappoint anybody if I fail to do it.

But when somebody else depends on me to produce something, and they’re counting on me to do it in the time-frame we agreed on, that’s when I buckle up and do it.

I’ll probably start way too late and end up working all day and night, putting finishing touches just moments before presenting the work to the other party, but I’ll do it.

(I often send things into print around 6 AM after I’ve spent the night working. And one time I was finishing up my painting just moments before getting dressed and heading to the event.)

Do I hate myself later for the stress I caused myself? Of course I do. It takes a few days to a week just to recover from it.

But I get stuff done. Stuff I otherwise wouldn’t have.

Isn’t “selling” something you don’t have dishonest?

Those developers didn’t lie about the state of their product. They pitched an idea sketched on paper, and people didn’t seem to mind.

When I pitched my exhibition to that venue, I told them several paintings are “still in the making” and sent them the photos of the ones I had.

It’s like a pre-order. People know they won’t be getting the thing before a certain date, but they still want to have it because they believe in it.

Caveat: it usually only works if you have a proven track record

Sometimes your idea may be so brilliant that people will eat it up no matter who you are and what you did (or didn’t do) in the past.

But having past work that displays what you’re capable of will make them more comfortable giving you a chance.

If you’ve been blogging weekly for 3 years and have a decent following, you may pitch your book to a publisher, or let your blog readers pre-order it the moment you start writing it.

If you’re a great illustrator that published awesome work in the past, your Kickstarter (or Patreon) campaign for a comic will go much better, than if you were just a beginner.

Of course just pitching around without doing any real work beforehand won’t give results. There’s no easy money here. This is not the tactic for people who are lazy all of the time. But it sure as hell works for those of us who are lazy most of the time.

So what can you sell today?

Stop sitting on your brilliant idea. Go forth and sell it. [Tweet this!]

Thinking about writing that book? Why not change your process?

Instead of waiting until the last moment before launch to publish the details, figure out a working title, make (or commission) a cover and create a landing page with an opt-in form and start sending people to it. That way you can see if there’s any interest before you’ve spent months writing it.

Have something else in mind? Figure out a way to commit to someone who will really hold you to it. I’m not talking friends, mastermind buddies or a coach.

I’m talking someone you really wouldn’t want to disappoint.

Do it, and witness yourself being magically transformed into a creative powerhouse. 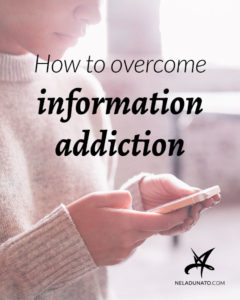 How to overcome information addiction 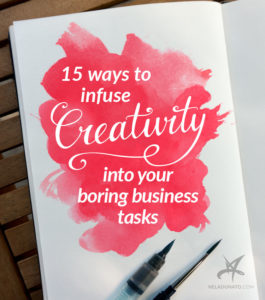 15 ways to infuse creativity into your boring business tasks

19 responses to “Sell Your Idea Before It’s Ready”